Splashing Gallons Of Paint On A Nano-Painted Leaf? Just Another Social Day At Nissan 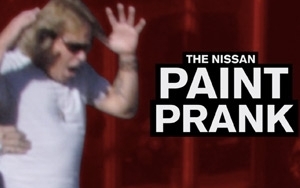 Nissan's North American digital team is pretty willing to experiment on social media. The company, for instance, recently encountered a viral video in which a student filmmaker, one Luke Aker, created a faux luxury-car ad extolling his “priceless” 1996 Nissan Maxima.

Nissan actually bought the car from him, and made a social campaign out of its restoration of the car, where fans could suggest elements of the car’s customization. Nissan then brought the filmmaker back in to shoot another video featuring his now-restored car.

The automaker is playing around again, this time with its Leaf electric car, the top-selling electric car in the world. At this year’s New York International Auto Show the company introduced a one-off version coated with a product called Ultra-Ever Dry, a nano-tech paint that repels substances and liquids of all kinds, including, well, paint.

Now the car and its paint are in a social video campaign all about how substances just roll off its back. The effort, via Zócalo Group, is a three-part program starting off with "The Nissan Paint Prank," a candid-camera vignette film in which a pair of incompetent painters involve pedestrians in "accidental" paint spills to the detriment of a white Leaf parked beside them. The bystanders are ready to throw fists at each other and lawyer up until the two actors point out that the paint simply runs off the car like water. After revealing themselves and the setup, they let the people take turns splashing paint on the car.

A second video component is on Nissan North America's Instagram channel, wherein consumers can "guess the mess" from footage of different mystery liquids and substances (like a steak) splashing on the on the car. A third component lets people suggest what other substances they want to see, within reason, spilled on a Leaf, and Nissan will try to accommodate. The automaker will encourage engagement by entering participants for a chance to win a gift card toward a car wash.

Says Scot Cottick, senior manager of social media marketing, "I think one thing we try to rally around is that it's not just 'well, here's this product.' We thought about how to have fun with it, to be honest. And who really likes to wash their car? So there was a level of humanity with it."

He tells Marketing Daily that some of the inspiration comes from programs like Nickelodeon's "Double Dare" kids game show combining trivia questions with food fights, slime tossing, and other mess-inducing hijinks. "We kind of thought, 'let's have some fun,' to prove out innovation, and see how people like it. The reason why those things are important for social is our platforms are channels for dialogue with customers, and we think that should be a balance of fun, helpful and relevant content. It lets us take very a serious topic like innovation and bring in fun.”