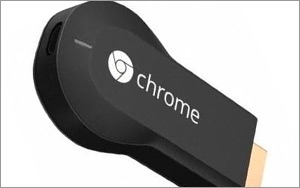 At least for the moment, Google appears to be besting Apple in terms of streaming media sales.

That’s according to new data from Parks Associates, which shows that Google’s Chromecast service accounted for 20% of streaming media sales during the first three quarters of the year, which outdid Apple TV and its 17% market share.

Both tech giants continue to trail streaming media leader Roku, which boasted a 29% market share during the first three quarters of the year.

With its Fire TV service, newcomer Amazon and has already managed to secure 10% all streaming media sales.

Giving consumers more reasons to shop around, Showtime and Sony planning to launch their own over-the-top (OTT) video services to compete with Netflix and HBO.

The market for streaming media services continued to grow at a respectable rate. Overall, 10% of U.S. broadband households purchased a streaming device — be it a streaming media player or “stick” — in the first three quarters of 2014.

“Nearly 50% of video content that U.S. consumers watch on a TV set is non-linear, up from 38% in 2010, and it is already the majority for people 18-44," according to Barbara Kraus, director of research at Parks Associates.

Going forward, Kraus promised that the only certainty for streaming media players is change.

“The market is changing rapidly to account for these new digital media habits,” she stated. “Roku now offers a streaming stick, and Amazon’s Fire TV streaming stick leaves Apple as the only top player without a stick product in the streaming media device category.”