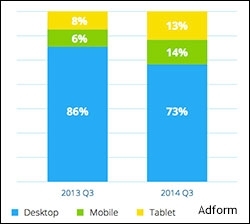 Advertisers in Europe continue to increase their use of programmatic ad technology when buying and selling media. European marketers spent 16% more via programmatic in the third quarter of 2014 compared to the second quarter, per a new Adform report. Year-over-year spend growth is up over 200%.

However, unlike the U.S., European marketers are not turning toward private ad exchanges with as much zeal. Adform notes that private exchanges accounted for 28% of total programmatic ad spend in Europe last quarter, up just 1% from the previous quarter.

While slow, a shift from open to private exchange trading is underway in Europe, and Adform predicts it “will generate higher revenues for publishers, and will prompt them to offer programmatic access to greater quantities of their premium inventory.”