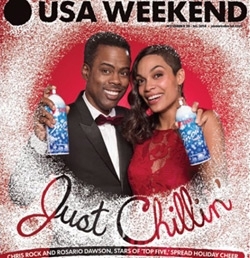 USA Today will cease publication of its newspaper-distributed magazine, USA Weekend Magazine, at the end of this year, the newspaper’s publisher Larry Kramer told staff in a memo circulated this week. The December 28 issue will be the magazine’s last. Around 30 staffers will be laid off in the closure.

Kramer said that USA Today will now focus on its weekend Life product, an expanded weekend section developed for local newspapers that focuses on entertainment and lifestyle content, which is already appearing in 35 newspapers owned by parent company Gannett Co.

Gannett began supplementing its local newspapers’ coverage with content from USA Today last December; the move was intended to bolster the local pubs’ national and international news, while freeing up editorial staff to focus on local reporting.

The news that USA Weekend will cease publication comes as Gannett prepares to spin off its newspaper publishing division as a stand-alone company, creating two separate publicly traded companies, in order to focus on its more profitable broadcast TV business.

The closure of USA Weekend also follows a round of consolidation among publishers of newspaper-distributed magazines. In September, Athlon Media -- publisher of American Profile, Relish and Spry Living -- announced the acquisition of Parade, one of the country’s oldest and most widely distributed newspaper supplements, from Advance Publications.