Vizio Aims To Hack The Fiesta 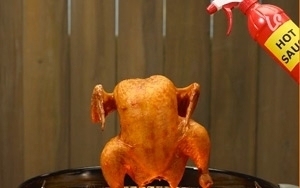 It’s the first year of the college football playoff system, meaning there’s new opportunities for parties, and Vizio — as sponsor of the Fiesta Bowl — is offering up (and looking for) ideas to help pull those parties off seamlessly.

Via a new promotional campaign, the company is looking for suggestions for new so-called “party hacks” that make entertaining easier. Under the banner of “This Is How We Fiesta,” Vizio is offering up solutions such as installing a strong magnet below a wall-mounted bottle opener to catch loose caps or laying down a carpet of Astroturf (which can later be rolled up and thrown away) to catch spills and garbage during the game.

To encourage fan participation, the brand is asking fans to submit their own game-day party hacks via photo or short video through the Web site thisishowwefiesta.com. The brand will cull the list of entries into a group of 10 finalists for fan voting between Dec. 15-19. The winner will receive a trip for two to the Vizio Fiesta Bowl in Arizona on Dec. 31.

“This year's Vizio Fiesta Bowl is all about a new way of celebrating game day,” said Lily Knowles, vice president of product marketing, in a release. “As part of the new playoff system, the Fiesta Bowl will be a great kickoff to the new bowl game series, and we look forward to this year's match up along with awarding the fan with the best game day hack with a trip to watch all the action in Arizona.”