'8' Reasons To Read About This New Video Platform

With user-generated content exploding, especially a prosumer market of high-quality video programming, a new platform is launching today to give those creators control -- and profits -- of every video they upload to the world. The platform, dubbed 8 (like the number, but representing the scientific symbol for infinity), is the brainchild of Sue Fennessy, the former Australian ad exec who successfully launched ad spending data cooperative Standard Media Index.

Fennessy, who will continue to serve as CEO of SMI, serves as co-founder and chair of 8, which is being run day-to-day by Co-founder and CEO Beth Haggerty, a media industry vet who most recently was CEO of Ology, and previously was COO of IAG (Intermedia Advertising Group) prior to its sale to Nielsen.

The timing of 8, which is located at the domain www.weare8.com, couldn’t seem better in terms of both the burgeoning content creator and content marketing marketplaces. From Madison Avenue’s point-of-view, because it is being structured as a way for users to get paid based on what they license to end-users.

“The ad marketplace, for us, is almost like an eBay of content,” says Fennessy, noting that brands and agencies are searching for an efficient marketplace for licensing content directly from creators.

Unlike other video uploading sites such as YouTube or Facebook, Fennessy says 8 gives 100% control, and 80% of revenues, directly to its users.

Users have the option of taking the revenue as a direct payment via PayPal, or they can “pay it forward” by allocating it to various charities.

Fennessy said the programmatic exchange would function more like an ad network than a true auction-based exchange, and said it would likely be priced based on prevailing CPMs in the ad industry for comparable online video advertising.

Given the favorable terms of 8’s model, the platform is launching with more than 250 “content partners,” including some major TV networks, as well as individual celebrity performers, athletes, artists and various personalities, including Usher, Donna Karan, Jamie Oliver, Patricia Arquette and Keep A Child Alive/Alicia Keys.

While 8 is launching as a “closed beta” on the Web and mobile Web, the platform plans to launch a native IOS app in December and an Android app in early 2015.

8 has received $4.5 million in funding to date. The funding was led by Frederick J. Warren of Sage Venture Partners and Boris Jordan of The Sputnik Group. 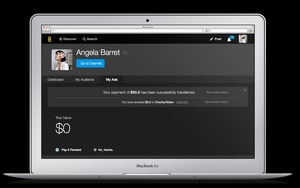 Screenshot of 8's payment system "paying forward" to a charity.