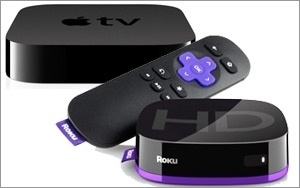 A survey from Boston-based Strategy Analytics says the average U.S. broadband household now has 1.9 connected TV units as of the third quarter 2014, up 28% versus a year ago, when it average 1.5 units, and 5% higher from the second quarter of this year.

The report says Samsung is the dominant player in the U.S. for smart TVs, with a 35% share of unit shipments during the third quarter. Vizio was second, followed by Sony and LG.

When it comes to gaming consoles, Sony had a 50% share of unit shipments in the quarter. Microsoft has the largest installed base with close to 30 million for Xbox.

When it comes to third-quarter shipments of digital streaming devices, the study says Google’s Chromecast took the top spot with 26% share of shipments followed by Roku and then Apple TV.