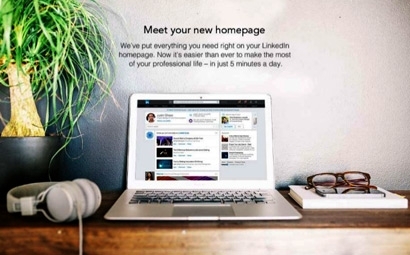 The jury is still out on Facebook at Work, and whether it can challenge LinkedIn as the business world’s de facto social network. Not taking any changes, however, LinkedIn is clearly accelerating its rate of product innovation.

Just this week, the public company debuted a new home page, along with a distinct activity dashboard. Users can see how many people view their profiles, and better understand how their status updates are performing.

“Learn who found you — from that CEO to a long-lost friend — and how they found you, plus how you rank across your connections, within your company, and other LinkedIn members like you,” Elizabeth Burstein, a senior product manager at LinkedIn, explains in a new blog post.

Per these most recent changes, it should also be easier for community members to make quick edits to their profiles — in some cases with a single click.

LinkedIn is also hoping users will increasingly rely on its service for breaking news from personal as well as professional sources.

At least among the advertising community, LinkedIn has never been more popular.

While Facebook and LinkedIn are virtually tied in terms of the share (92%) of advertisers using each service personally, they are far more connected with others via LinkedIn — (an average of 507 connections) vs. Facebook (an average of 385 friends), according to recent findings from the Association of National Advertisers.

Compared to average U.S. consumers, ad executives are more avid users of all forms of social media, and LinkedIn in particular. More than four times as may ANA members (92%) use LinkedIn as compared with the average adult Internet users (22%), according to estimates from the Pew Research Center.

LinkedIn recently reported that revenue rose 45% in the third quarter, but forecast slowing growth in the current quarter in connection with its core recruiting business.