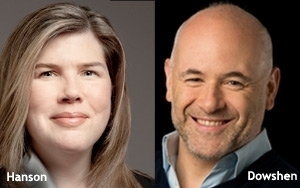 Partners + Napier (P+N) is beefing up its management by adding presidents to lead two of its offices. The agency has promoted Sarah Hanson to President of its Rochester office, while Matt Dowshen has been elevated to President at the New York office.

The appointments follow a number of significant new business wins this year and a 15% to 20% growth projection for the agency in 2015.

Previously Hanson was Chief Growth Officer at the agency while Dowshen joined the agency in June as Managing Director in New York. Previously he had been with Ogilvy & Mather.

“We’ve seen massive change in our business and in our industry, especially in the past couple years,” said Sharon Napier, CEO at Partners + Napier. “A large part of anticipating our clients’ needs is having the right leadership in the right places, so we’ve proactively crafted our senior team with an eye on the future.”

Both executives will be responsible for the development, growth, and talent acquisitions of their respective offices.

Collectively, this executive shuffle underscores the agency's growth over the past year with new business wins including BMW Financial Services, ConAgra Foods, and Bob Evans Foods. The NYC office recently won the digital creative work for Lufthansa Airlines as well as assignments from Wiley Publishing and Blackboard.

Before the appointments of Hanson and Dowshen, P+N, part of agency network Project: WorldWide since 2011, had not had a President for over two years.