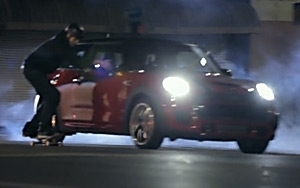 Skateboarder king Tony Hawk, who can probably do as many aerial spins as Baryshnikov after a redeye and a double espresso, is flying over Mini Coopers again.

Hawk, who started doing projects with the automaker last year, and vice versa, appeared in a video this year in which, for the first time doing such a thing, he jumps over a Mini John Cooper Works Hardtop coming at him at 30 mph. He also did ramp jumps over a huge queue of Minis rolling out of San Francisco for the "Mini Takes The States" cross-country owner road trip.

Now, timed with the launch of the Mini John Cooper Works Hardtop performance car, which premieres at the North American International Auto Show in Detroit in January, Hawk and French rally driver Guerlain Chicherit appear in a new viral vilm.

The video, via Mini’s agency Sausalito, Calif.-based Butler, Shine, Stern & Partners, involves Chicherit and Hawk doing a kind of urban rally-driving tango: Hawk cruises alongside the Mini as it careens around an urban landscape. Hawk rides along, gripping the Mini's door, then doing stunts like jumping over a transformer box, that bursts into flame as he slides over the top. The tour de force is a ramp leap, a Hawk-designed stunt, when Hawk executes an aerial 540 right as Chicherit performs a 180 spin just within the 16-foot gap between the two ramps.

Says Lee Nadler, marketing communications manager at the Woodcliff Lake, N.J.-based automaker: "There was definitely lots of trust involved." He says the videos are a great vehicle for social media. "One of the things we are interested in doing is creating a piece of content that people will pass along and watch again and again. And there are lots of layers to this content.

"The effort includes making-of footage that includes interviews of the participants and creative executives who put it together. For the Mini John Cooper Works [Hardtop], we wanted to do something special with it, not just showing what the car can do, but using a concept that mixed interesting ingredients from the performance of the car, to the driver, to Tony."

Mini had gotten over a million worldwide views of the video as of Dec. 15 , three days after it went live, per Nadler. "That's a high watermark to reach, so it's getting a lot of pass-along." Then of course we have Tony Hawk putting out posts through his channels, and that includes behind-the-scenes footage. And Chicherit has been putting the video out as well and he has a lot of motor sports followers.

The back-story, a one-year deal with Hawk, that extended to two additional years, mirrors the brand's somewhat ersatz personality: Nadler says the two came together when Nadler went to a fund raiser for the Tony Hawk Foundation, which has helped build and design some 500 skateparks in under-privileged areas. "He emailed me the next day to say he would be skating at Chelsea Piers [in New York]." Nadler showed up, watched him practice doing his Mcspin move again and again, even though the ramp wasn't really big enough. Afterward Nadler gave him a ride back to Hawk's hotel in his Mini. "We had a great chat, and he was checking out the car."

The two came up with the notion that both skateboarding and Mini owners are "a community of individuals," as Nadler puts it. "At the end I asked him what's the most important criteria for you in partnering, and he said authenticity. I knew we would have great partnership together, not forced; that we could do cool stuff together without doing it in a way that was an 'official spokesperson' kind of thing."

There's money trading hands, but a big part of it is cross promotional activity with Mini as official sponsor of Hawk's Birdhouse Tours, where the skaters motor in Minis from stop to stop; and sponsorship of his charity foundation.

“[Hawk] connects with so many different kinds of people in their 40's and 50's, but also with younger generation that's skating and trying new things all the time,” says Nadler. “So he appeals to everyone from millennials to empty nesters, like Mini.”