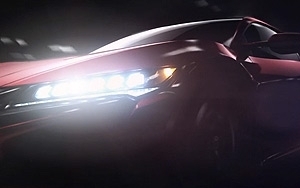 Trucks and luxury cars will be big in Detroit at the North American International Auto Show next month. Automakers are teasing, hinting and generally offering dribs and drabs about what they are hiding under the bedsheets.

And in both cases the stakes are high, especially in the truck area with Ford's new F-150, and GM's pair of new midsize trucks and resurgence of Chrysler Group's —I mean FCA US LLC's — Ram truck division. So the competition from Japan will be trying to stake a claim in the domestics' own backyard.

Nissan will reveal the new Titan pickup at long last — a much needed redo, and —  has been teasing the reveal. Toyota's Tacoma has been the market leader by default for a decade, and has pretty much done nothing with the truck because the category has been essentially dormant. But with the new Chevy Colorado and GMC Canyon trucks breathing down Toyota's neck, the automaker will use its stage in Detroit to unveil the next-generation Tacoma.

General Motors' GMC truck division will debut a special edition Canyon in Detroit, the automaker said. And Honda says it will unveil a redesigned version of its quasi-pickup truck, the Ridgeline, as well as the next-generation Pilot SUV. John Mendel, the company's EVP for North America, promised at an event in Detroit on Tuesday that 2015 would be "the year of Honda," and mentioned the new versions of the MDX and RDX crossovers are in the mix.

On the luxury side, the most anticipated dream-car for the reveal is the long-awaited production version of Acura's supercar, the iconic NSX. The concept version of the car debuted at the show in 2012, and was featured in a Super Bowl ad in 2012. The car hasn't been in showrooms for years, and toward the end of production only accounted for a few hundred deliveries per year.

But it has a mythical status and a solid following, including, presumably, car guys Jay Leno and Jerry Seinfeld, who were featured in the Super Bowl spot going to extreme lengths to get their hands on the then-fictive job number one. Tony Stark, a.k.a. Iron Man, is also a fan, as he switched out his Audi R8 for one in 2012 film “The Avengers,” although it only appeared briefly, and, really, it was a super dolled-up 1991 version.

Lexus, not to be outdone, will show its second vehicle F brand high-performance car, on the heels of having launched the RC F coupe earlier this year. The Toyota Motor luxury unit is being cagy about the car.

BMW is not. The automaker, whose U.S. office is in Woodcliff Lake, N.J., will do something of a bipartite program, showing its performance cars 6-Series cars — the BMW 6 Series Convertible, Coupe and Gran Coupe; the new BMW M6 Coupe, BMW M6 Convertible and BMW M6 Gran Coupe — on the one hand, and new services for its BMW i hybrid/electric powertrain division's i3 and i8 cars, on the other.

And BMW says it will be showing off the BMW ConnectedDrive "over-the-air regular automatic map updating technology" navigation system. And it will talk about ChargeNow, a charging and payment service that it is rolling out in the U.S. with Chargepoint fast-charging stations; also a ParkNow app-based service that is meant to help BMW i owners to find a parking space based on price, distance and, of course, availability of charging stations and car washes. Chevrolet will also focus on electric, unveiling the 2016 Volt.