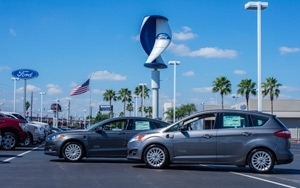 For the automotive business in the U.S., December is going to be the champagne cork for a year of record sales, and the best delivery numbers since before the recession. J.D. Power & Associates predicts December new-vehicle sales will reach the highest levels since 2006, per its LMC Automotive division forecast.

Edmunds.com points out, with its prediction for the month, that the end of the month will be especially strong. The strong selling days are the tag-end of the month in general, but especially in December. The firm said the week between Christmas and New Year's will be the busiest car shopping time of the year, and that leasing will hit an all-time high. The digital auto pricing and research firm projects that new car sales during the final week of December will be 78% higher than the average week earlier in December, while typically the last week of any month averages just 40% higher than the sales in earlier weeks.

John Humphrey, SVP of the global auto practice at J.D. Power, said Dec. 31 last year was, in fact, the strongest sales day of the year. The firm says light-vehicle sales are on their way to hitting 1.5 million units this month, a 6% increase versus the month last year. "The end of the year typically drives more showroom traffic as customers seek to take advantage of better deals used to clear out inventory in preparation for the new year," he said -- adding that on Dec. 31 alone last year, the industry moved about 118,000 units, or 10% of the month's sales.

And for next year, LMC Automotive predicts retail sales will reach 14 million units, and says total light-vehicle sales, including fleet, will reach 17 million units from 16.8 million this year.

Said Jeff Schuster, SVP of forecasting at LMC Automotive: "Economic bliss, driven by job creation, wage growth and low gas prices may drive consumers to showrooms at a faster pace, emphasizing the notion that this recovery may not be over quite yet."