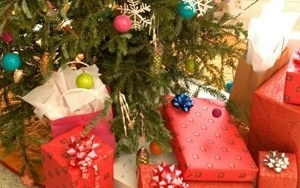 Why ask your sister about holiday deals when there's Amazon? When it comes to where people will go for information about what to purchase this holiday season, Amazon rules across all generational segments, according to Horizon Media's second annual Holiday Shopping Pulse.

Men are more likely than women to rely on YouTube (16% vs. 4%), Twitter and blogs (9% vs. 4%) for holiday information. Those with children are nearly twice as likely as those without children to turn to Facebook (20% vs. 11%).

While most people prefer to start seeing holiday advertisements between Halloween and Thanksgiving, rather than, say, after Thanksgiving or before Labor Day, household income is more likely than age, gender, or marriage status to influence their attitudes about holiday advertisements. To that end, those earning less than $20,000 are twice more likely than those earning more than $20,000 to be okay with seeing holiday ads before Labor Day (7% vs. 3%).

Furthermore, despite the prevalence of smartphones, most people who shop online still do so via computer. However, men are twice more likely than women to shop using their smartphone (11% vs. 5%), as are those with kids versus those without children (11% vs. 6%) and single individuals (12%) compared to married (7%) or divorced (4%).

The amount of holiday shopping Millennials are doing online this year has increased 35% from last year, and their in-store usage of their mobile devices while shopping increased 17% over last year.

When they’re connecting with friends to shop online, 45% of Millennials are physically sitting with them, 24% are connecting via Facebook, 21% are texting them, and 10% are talking to them on the phone.

Millennials are more likely than Boomers to feel better about their financial situation (34% vs 15%) and are willing to spend more this year on gifts (37% vs 15%), and to remain motivated by getting the best deal possible (72% vs 59%). Millennials are also twice as likely to visit consumer-to-consumer sites, such as eBay or Etsy, than Boomers.

Millennials who are social shoppers are much more likely to be spending a larger sum on holiday gifts than their non-social peers. This isn’t surprising since they are also more than 1.5 times more likely to feel better about their finances heading into 2015.

“As we observed last year, Millennials are willing to take the time to look for deals and online coupons as well as diligently price-check items before they purchase," says Sheri Roder, Chief of the Why Group, Horizon Media. "This is another reason why we believe the social element continues to increase as people check with their friends to share their deals and make sure there isn’t a better one out there. In the run up to the holidays, it will behoove marketers to monitor and take advantage of what they learn in social channels to drive Millennial shoppers—and their dollars-- to their brands.”