Kraft Foods Group CEO Steps Down; Chairman To Succeed Him 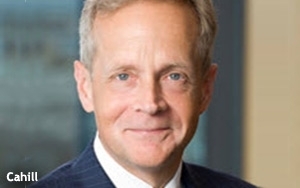 Kraft Foods Group has announced that Tony Vernon, who has served as CEO since the company's spin-off from Mondelez International in October 2012, will retire at the end of Kraft's fiscal year on Dec. 27, and will be succeeded by the company's current chairman of the board, John Cahill.

Vernon, 58, will stay on as a senior advisor through March 31, and as a director until the company's next annual meeting in 2015.

Speaking for Kraft's board in a statement, director Mackey J. McDonald praised and thanked Vernon for his leadership during the creation of Kraft Food Group and his championing of "culture, brand-building and innovation," which led to "multiple successful new products and brand rejuvenations, and raised the bar on recruitment and talent development."

Mackey added: "With the company on solid footing after the spin-]off, the time is right for new leadership to fulfill our potential as the industry leader. The board and Tony agree that we need to accelerate the pace of change."

"When you announce your retirement in 12 days, you were probably pushed out," Brian Yarbrough, an analyst with Edward Jones & Co. in St. Louis, observed to Bloomberg News.

Kraft's sales are projected to see little change this year, while profit declines 31%, Bloomberg points out. For its third quarter ended Sept. 27, Kraft reported net revenues up 0.1%, and net earnings down 10.8%. In today's announcement, Vernon said that Kraft is on track to deliver full-year results "consistent with our previous expectations, despite what continues to be a challenging industry environment."

Prior to joining Kraft, Cahill served as an industrial partner at private-equity firm Ripplewood Holdings LLC from 2008 to 2011. He also spent nine years with The Pepsi Bottling Group — including serving as chairman and CEO from 2003 to 2006 — and nine years with PepsiCo and KFC, where he served in a variety of management positions, including treasurer and CFO.

In the announcement, Vernon, who served as EVP and president of Kraft Foods North America prior to becoming CEO, thanked the Kraft team for making it possible to launch "an $18 billion start-up with the soul of a powerhouse." He added: "As I've said before, the hallmark of every great company is that it makes the right adjustments at the right time. I've worked in close partnership with John Cahill, an outstanding executive in the consumer industry, and have no doubt that the Kraft team will benefit from his strong leadership in the months and years to come."

Cahill stressed the rapid pace of change in the industry and the importance of staying ahead of the changes "as we build a stronger Kraft."

"While our immediate priority will be to remain focused on delivering results, we will also take a fresh look at the business to prioritize our investments and focus on sustainable profit growth," he stated, adding that he would have more to say in early 2015.