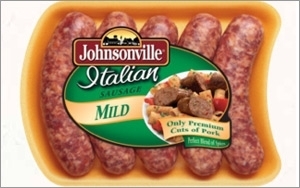 Those following Johnsonville Sausage on Twitter may have been the first to know that something was amiss. Last year, Johnsonville Sausage and its creative agency Cramer-Krasselt attracted more than 14,000 followers through the @JvilleGrilling handle and its regular tweets about grilling and meat.

More recently, however, that Twitter handle became inactive, with followers being redirected to @johnsonville. This week, as the brand moves in a new direction, Johnsonville Sausage has appointed Droga5 as its new creative agency of record.

In making the choice, Johnsonville VP Fabian Pereira said the Droga5 team "understands consumers’ passion for Johnsonville sausage and its role in the lives of millions of American grilling and cooking enthusiasts. With their history of developing great breakthrough work that transforms brands, we are thrilled about the prospects for this new partnership."

Last summer, Cramer-Krasselt launched a multifaceted campaign that included a humorous 80s power ballad that reminded men not to pierce meat while grilling. In addition to the music video, YouTube featured a singalong version and consumers were invited to download the "Don't Pierce the Brat" lyrics, as well as get karaoke music and sheet music from the brand's Facebook page. The site also invited them to upload their own videos to enter a sweepstakes.

The client indicated that there was nothing wrong about this campaign that necessarily drove this agency review. Rather, it has been Johnsonville’s process every few years to review the creative partners it uses to support the various advertising and marketing work for Johnsonville, said Pereira. “Going through this process helps ensure we have the best thinking, resources and creativity to help Johnsonville continue to grow faster than the market. Johnsonville has been successful in its creative relationship with C-K over the last six years, and we appreciate the good work they’ve done in building awareness and engagement for our brand nationwide.”

Johnsonville Sausage has invested in ad spend in recent years. The Wisconsin-based company's advertising budget included $22.5 million between January and June 2013 and $31.99 million for the entire year, according to Kantar Media. In 2012, the meat brand spent $19.6 million on advertising.

The agency review was managed by Avidan Strategies of New York.