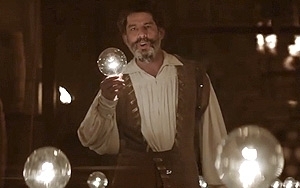 What does Thomas Alva Edison's illuminating invention have to do with rum? The after party, of course! The marketing umbrella for Puerto Rico rums, representing the source for 70% of rum consumption in the U.S., is launching a campaign to spotlight the sugar cane spirit from the commonwealth by tying into the History Channel via a series of videos aligning various achievements and inventions.

History.com is the main channel for the effort, “Rum Times,” by the The Rums of Puerto Rico. There is also a dedicated Web site, www.itsrumtime.com, that also carries the videos, which can be launched with a button bearing the History Channel logo.

The four-minute videos are all shot in such famous locations in San Juan as El Castillo San Cristobal and La Arcada. A narrator, a fictive Puerto Rican distiller from the 19th Century, strolls amid horse-drawn wagons topped with casks of rum bound for ships to other countries, and lectures on the likes of Thomas Edison and his invention of the incandescent light bulb. In later videos, he will discuss the invention of the motion picture camera, and the evolution of sports moments. During the videos, he explains that rum is to Puerto Rico what wine is to France, Scotch is to Scotland and beer is to Germany.

After his lecture, in which the inventors themselves are shown in their labs like ghosts appearing in the nooks and crannies of Old San Juan, the narrator flings open doors to rooms where the celebrations take place, suggesting that after their achievements inventors celebrated with the spirit.

The webisodes were produced by Latitude 18 Films with Puerto Rican talent and technical crews, per the organization. The overall campaign, via JWT Puerto Rico, has a regional digital focus in the U.S., including in Florida, California, New York, Texas and Illinois. It extends to The Rums of Puerto Rico social channels on sites like Twitter, Facebook, YouTube and Instagram.

“This new marketing and advertising project gives an additional push to our local rum industry, complementing other efforts already underway to increase both production and sales volume in the United States”, explained Rums of Puerto Rico Director Pedro Cuellar in a statement. "The alliance with History.com allows us to deliver our message and connect with our audience and consumers.”