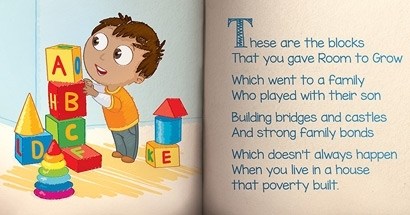 Boston charitable organization Room To Grow's new advertising campaign presented a key challenge to pro-bono agency Forge Worldwide. Messaging had to resonate both with low-income parents who need its services as well with those who have the ability to donate money.

The resulting campaign is a bit unexpected. Using the familiar context of a children's storybook with illustrations, the campaign is designed to elicit warmth through “storybook” illustrations, featuring toys, books and clothing—the key donation categories sought by the organization.

The agency worked with two Boston-based artists Jannie Ho and Renee Kurilla, who donated their talents.

However, the campaign's message isn’t a sweet one. Rather, the campaign is meant to help illustrate just how difficult poverty is. "People in poverty have to make incredibly difficult decisions every day – i.e. do I buy clothing or food for my kids? The impact on children is devastating," says Harry Chapin, President, Forge Worldwide. "We wanted to emotionally connect with people with the campaign in a thought-provoking and powerful way."

Forge has worked with Room to Grow for three years. Staff from the agency has also volunteered to help with some of the group’s projects. This campaign, however, is the first creative work for the client.

“Working with Forge to create these eye-catching, impactful ads gave Room to Grow the opportunity to connect with a broader audience and spread the word about how investing in the critical first three years can make a meaningful difference for babies born into poverty," says Robyn Carter, executive director of Room to Grow Boston.

MBTA donated ad space so the posters will appear on Boston subways and buses through early January. Transit advertising was selected largely due to the fact it reaches many socioeconomic groups in greater Boston.