What 'The Interview' Christmas Day Sales, Rentals Say About A Nation's Freedom 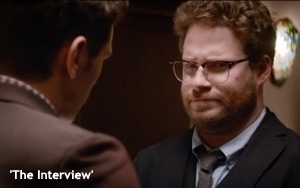 In an unprecedented show of support for democracy, Sony Pictures agreed to release "The Interview" in theaters and online Christmas Day, making history along with Google, Microsoft and the thousands who streamed the controversial movie. The movie studio formed an alliance with Google and Microsoft to rent and sell the comedy online in the midst of the North Korea-linked cyberterrorism attack to rent or buy from their online video stores. I was among the moviegoers eager to understand the reasoning behind the controversy and show support for free speech. Now it's time for U.S. officials to take cyberattacks more seriously.

Sony's studio also set up a new Web site, seetheinterview.com, to offer the movie directly. Since its release, "The Interview" continues to sell out at the more than 300 theaters willing to run the movie, and also continues to top the movie sales chart on the Google PlayStore, and leads as one of the "Top Selling" playlist on the YouTube Movies site.

While I had a few issues, except for a minor interruption (slow buffering) about an hour into the movie on Google Play, USA Todayreports that online game networks Xbox Live and PlayStation Network remain down Friday after an apparent hack attack. The two services were offline much of Christmas Day in an apparent denial of service attack. Login issues for users of Microsoft's and Sony's systems are being investigated.

The groundbreaking decision to release a movie simultaneously online and in theaters has been met with skepticism in the past, but if widely successful, Sony's move could set a new precedent. Seeing "The Interview" in theaters or streaming it from the comfort of home became more of a patriotic act than the importance of viewing the movie itself. For many, the decision to see the movie became an act to support free speech in the United States, rather than to enjoy the entertainment.

Christmas Day, about 300 independently owned U.S. theaters began running "The Interview," while major theater chains like Regal Entertainment and AMC Entertainment last week opted out after people who claimed responsibility for the cyberattack on Sony Pictures threatened violence against venues screening it.

The movie's theme isn't new. The crude comedy puts it in the same category as the slapstick humor in "Airplane," as what moviegoers have seen in "Animal House." Seth Rogen and Evan Goldberg co-directed the film, in which the characters frequently discuss sex and body parts.

It might have made a stronger statement being released on the U.S. Independence Day, but Christmas Day will have to do.