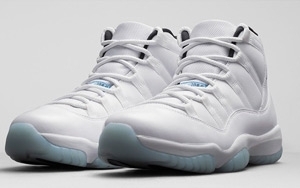 While new-edition basketball shoes are predictable best sellers during the holidays, this season seems to be one for the record books. Propelled by the introduction of the Air Jordan 11 "Legend Blue," with an impressive $80 million in sales in one day, Sterne Agee analyst Sam Poser says total basketball sales last week jumped 24.8%, led by a 54% gain in Nike’s Brand Jordan.

Sales of all athletic footwear has been strong this season, rising 11% to $93 million in the five weeks ending Dec. 6, reports the NPD Group. Basketball shoes accounted for $50 million of that increase, with a gain of 24%. And pricier basketball shoes are more popular, with 50% priced at $100 or more, compared to 35% in 2012.

“Basketball footwear is on fire, and it’s the premium price points that continue to drive the market,” writes Matt Powell, NPD’s VP of industry analysis for sports and leisure. “Sales of basketball shoes over $100 accounted for nearly all the growth in sales for the period. I expect the strong basketball trend to continue into 2015 as the largest brands are very focused on controlling inventory. Unrequited demand is keeping interest high on the part of the consumer.”

In the busy Thanksgiving week, NPD says, Brand Jordan accounted for $28 million of the $37.3 million weekly total, and $25 million in those sales came from sale of the Jordan VI Retro Mid.

Poser agrees that the months ahead look promising for basketball: “The launch schedule makes us very confident that the trend will remain robust.”

But he is less optimistic about prospects for the Finish Line, one of the leading retailers in the category, which he says isn't keeping up with teen tastes. While the shoes it has been stocking “may have been good from a design and performance standpoint, it was not what the casual/fashion seeking teen at the mall was asking for,” he writes. “Based on industry data and channel checks, we contend that there has been a major shift from wearing performance running styles as fashion to wearing retro and casual running styles as fashion. The current results, driven by increased promotional activity, highlight Finish Line's missteps.”