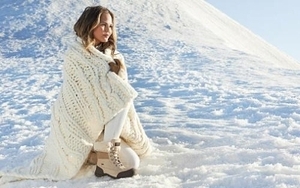 UGG Australia, a division of Deckers Brands, is featuring models Chrissy Teigen and Jack Guinness in its winter ad campaign.

The effort continues the overall brand tagline “This is UGG” first introduced in the fall. It aims to develop an emotional connection with consumers that transcends any specific product, according to the company.

The campaign was shot in Iceland and plays up the fact that while the UGG brand is fashionable, the line also infuses innovative weatherproof, waterproof and water-resistant technologies.

The multimedia, cross-channel campaign runs through Feb. 1 and illustrates how UGG products "Feels Like Nothing Else.” It launched Dec. 26.

“These are beautiful, yet highly functional products that also deliver the luxury and comfort that the UGG brand is known for,” said Connie Rishwain, UGG president, in a release. The new collection highlights fashion-forward weatherproof, water-resistant and waterproof styles fit for blizzards, thunderstorms and everything in between.

Teigen and Guinness, who have achieved fame by being "plugged in," were asked to do just the opposite -- unplug in order to reconnect to their experiences, environment and themselves.

UGG has launched two videos, including one entitled “Soul Food,” featuring Teigen indulging in food and beauty. She talks about slowing down to appreciate life's small moments. In “On the Rocks,” Guinness reflects on the dramatic Icelandic landscape.

Teigen, who was on the cover of the “Sports Illustrated” swimsuit issue in 2014, also has designed a capsule collection with swimwear designer DiNeila Brazil. In 2013, Teigen appeared in her husband John Legend's music video for the song "All Of Me," which was inspired by their relationship.

Guinness is also a DJ and has modeled for brands including Paul Smith, Barbour and Nicole Farhi.