McConaughey Back For Another Lincoln Philosophical Drive 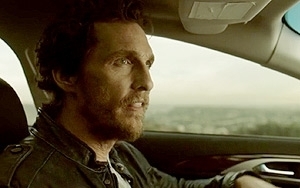 Matthew McConaughey is back to reprise what might be his most buzzworthy role since probably well before “True Detective.” No, no --  it's not a movie, it's the latest campaign for Lincoln, via New York-based Hudson Rouge. This time it's for the MKZ and MKZ Hybrid sedans, part of a two-year relationship between the actor and the brand.

His first collaboration with Lincoln -- "Live Your Moment," for the MKC crossover, which has garnered as much earned media as any campaign in recent memory -- had the actor in the Texas outback and downtown Austin, mulling life, the spheres, and a bull named Cyrus while driving the crossover.

The new effort -- comprising a pair of TV spots with big-stage rotation on college football, including New Year’s Day bowl games -- keeps McConaughey in a solitary communion with the 2015 MKZ and MKZ Hybrid sedans, introspective cogitations intact. But this time in L.A. rather than Texas. It is a hybrid, after all. And he has a rough beard and ’stache this time.

In one ad, he sits in a coffeehouse, sipping coffee while rain falls (as it does there once in a blue moon) over Silver Lake. He gazes wistfully at the MKZ parked outside, and the rain quits. He taps his fingernail against the sweat-beaded glass of water on the table in front of him, and heads out to the car, jumping in and opening the retractable roof before driving off. From a top shot through the open, retracted, roof We get a glimpse of the MyLincoln Touch console. In the other spot we see the hybrid-powertrain console display.

Lincoln started teasing that spot across Lincoln brand channels on Friday. Beginning Monday, the spots are being shared across the channels along with behind the scenes images and clips about the locations used for each spot, details of the sets and features of the MKZ and MKZ Hybrid. The channels being used include Facebook, Twitter, Instagram and YouTube.

In the second ad, shot in Griffith Park above Los Feliz,he mulls the possibility of not being a "tree hugger" while also not being a Koch brother, either (okay, he doesn't mention them, but he does say "tree huggers"), and the idea that the car allows you to embrace the ideals of the former without looking or feeling like you have to compromise to do so.

Dave Rivers, Lincoln marketing communications manager, tells Marketing Daily that the actor has a big influence on the creative execution, and that he, in fact, improvised the last line, "That's the sweet spot," in the second ad.

"That's the biggest value out of who he is, when it comes to the campaign and script writing and overall idea," says Rivers. "We have a script, and make sure he's bought into what it will look and sound like." To get him up to speed, the automaker brought McConaughey to the company for an accelerated Lincoln brand and vehicle immersion.

“South Park,” Ellen DeGeneres and even Fisher Price parodied the first ads. Rivers says it worked out, since the primary goal is to build awareness of a brand that luxury buyers hadn't even considered putting on their consideration lists. "And we don't try to take ourselves too seriously; our own communications have been a little tongue in cheek. And [DeGeneres] actually kept a lot of the ad intact."

The effort, in addition to getting big play on the Sugar Bowl, has a major product integration and sponsorship with Fox’s "Empire" leading up to season finale in May, a big buy on the Grammy Awards in February, a series of digital home page takeovers and a push on Twitter and Facebook.