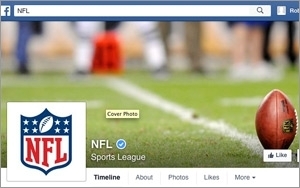 Facebook and the National Football League have entered into a video-sharing partnership, and Verizon Wireless is coming along for the ride.

The wireless carrier is sponsoring videos -- featuring highlights, breaking news, and fantasy league tips -- which will appear in the news feeds of select Facebook users. Facebook and the NFL will share the resulting ad revenue.

"This is a small video sponsorship test, and we will be evaluating how people, publishers, and marketers respond to this kind of co-branded video content on Facebook," a Facebook spokesperson told Social Media & Marketing Daily, on Friday.

Across channels, video is booming, and it holds huge monetization opportunities. Indeed, online video's share of global ad spend will increase from 1.9% in 2014 to 2.8% in 2017, according to ZenithOptimedia's new Advertising Expenditure forecast.

The Wall Street Journal first reported the partnership, this week.