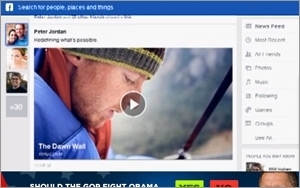 Page owners — from brands to news outlets — will soon be invited to top off their pages with featured videos. The super-sized videos will be accompanied by a live comment feed, and a playlist of additional videos.

Across channels, video is booming. This holds huge monetization opportunities. Indeed, online video's share of global ad spend will increase from 1.9% in 2014 to 2.8% in 2017, according to ZenithOptimedia's new Advertising Expenditure forecast.