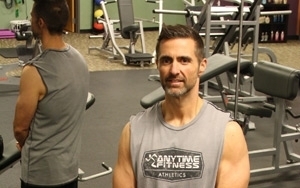 Anytime Fitness member Mark Bryant's huge weight loss has given him a new lease on life.

The 40-year-old from Star, Idaho lost 264 pounds during three years of gym membership and the chain is capitalizing on his success by publicizing his dramatic transformation and the ensuing media coverage. The company is posting links to news stories about Bryant on its social media pages.

A spokesman said it has not been determined whether the fitness company will use Bryant in any formal advertising efforts.

When he weighed 442 pounds and experienced chest pains three years ago, Bryant never imagined that someday he'd be featured in People magazine or invited to show off his body on "Good Morning America" or "Entertainment Tonight." Bryant was recently profiled in People's annual "Half Their Size" issue.

"When I started going to the gym, I feared going into a huge gym with tons of people because I felt like people would be watching and I would be embarrassed," says Bryant, who now weighs 178 pounds. "Anytime Fitness provided a safe, smaller venue where I felt comfortable from the first day I went there. Not only that, but I didn't feel like I was sacrificing anything from an equipment standpoint.”

The gym has all the machines and weights typically found at a bigger gym, he says.

“I also travel often for work and typical hotel fitness centers are fairly inadequate,” he says. “I was always able to locate an Anytime Fitness close to where I was staying and get my normal workout in while I was away."

Anytime Fitness staff and members were always so warm and inviting, he says. "They made me feel very comfortable,” he adds.

Bryant says that his physical transformation has impacted him emotionally as well. Simply put, he's happier and enjoying life to the fullest.

"I love the little things, helping a friend move a piece of furniture and not feeling completely drained," Bryant said. "Coaching my daughter's soccer team and being able run the drills with them, putting the Christmas lights on the house with ease, going into a public place and not being stared at, trying on clothes from a normal department store, going through a turnstile at the airport and not having to be a contortionist, fitting into a booth at a restaurant, seeing a friend who I haven't seen in a long time and having them not recognize me, being able to perform athletically -- the confidence I have gained is worth all the hard work.

“I couldn't have done it all by myself, but I feel like I can accomplish anything that I put my mind to. It's a wonderful feeling."