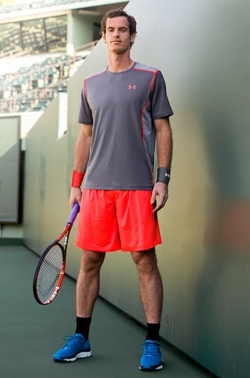 Under Armour is making good on its promise to expand its international appeal, signing tennis superstar Andy Murray to a four-year endorsement deal reportedly worth $23 million.

The Baltimore-based company has been consistently adding to its roster of athletes, but they are mostly American, including NFL greats Tom Brady and Cam Newton, golfer Jordan Spieth and skier Lindsey Vonn. The addition of Murray, the No. 1 tennis player in the U.K. and the sixth-best in the world, will up its visibility well beyond the U.S. Murray won Wimbledon in 2013, the first British man to do so in 77 years.

"I am very honored and excited to be joining Team Under Armour and to help them tell their story globally," says Murray in the press announcement. Under Armour is “committed to providing innovative apparel, accessories, and footwear, with an unmatched focus on training and performance."

Murray had previously endorsed Adidas, a deal The Guardian says was thought to have been valued at $23 million over five years.

In addition to wearing UA gear, Murray is going to appear in marketing campaigns, and plans to begin making appearances on behalf of the brand next month.

While giants like Nike and Adidas have more moolah to spend signing top athletes, Under Armour is committed to building its roster. This year, it has also beefed up its women’s marketing star power by signing ballet dancer Misty Copeland and supermodel Gisele Bündchen (Bündchen is married to Tom Brady, whom Under Armour wooed back in 2010 with equity in the company.)

The company expects revenues of more than $3 billion this year, based on growth of 30%. In its most recent quarter, it says international sales rose 104% to $90.3 million.

“We are delivering consistent top line results while making the right investments to support both the near- and long-term opportunities,” CEO Kevin Plank said in releasing those results. “This includes investments to build world-class design and innovation capabilities for all of our products, accelerate our international footprint, and expand our 30 million users under our Connected Fitness platform. We believe this balanced approach will continue to drive our global ambitions.”

Murray is not the company’s first partner in the U.K. Since 2011, it has had a sponsorship deal with Tottenham Hotspur, the North London soccer club.