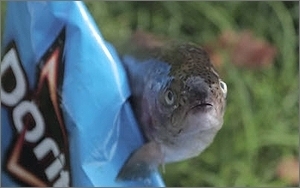 Doritos has revealed 10 finalist videos, chosen from among nearly 4,900 submissions, for its annual "Crash the Super Bowl" contest.

Two of the ads, now posted on the brand's site, will air during the Super Bowl XLIX broadcast on Feb. 1: one picked by worldwide voting on the site through Jan. 28; the other by Doritos.

The popular-vote winner will receive $1 million and a year's contract to work at Universal Pictures in Hollywood, and the other broadcast finalist will receive $50,000. The other eight finalists win $25,000, and all 10 are invited to attend the game in Arizona and watch from a private suite.

The contest, now in its ninth year, drew submissions from 29 countries, and a record four international videos were chosen as finalists: two from Canada and one each from the U.K. and Australia.

Of the 10 ads, six feature babies or kids (including — spoiler alert — one with a fart-joke payoff), two feature or include animals, and five feature or include adult males exhibiting selfish or childish behavior to secure a bag of Doritos or prevent others from sharing it.