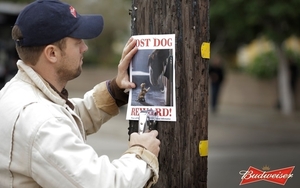 Anheuser-Busch announced it is featuring both Budweiser and Bud Light in its Super Bowl lineup this year.

Budweiser also will debut a 60-second ad that is still in the creative process. It will highlight the beer company’s brewing credentials.

The creative agency for both Budweiser spots is Anomaly.

A third 60-second spot, “Coin,” features an everyday Bud Light fan who experiences an unforgettable night with ‘80s iconic old school fun simply by indicating he is “Up for Whatever.”

Meanwhile, Newcastle Brown Ale is doing a video version of a photobomb. The brand admits it can’t afford a Super Bowl spot of its own. But that’s not stopping the beer company from trying to sneak in on Doritos’ coattails.

The snack food maker is in the final stages of a contest to select a consumer-generated ad to be shown during one of its Super Bowl time slots. Agency Droga5 created a tongue-in-cheek “entry” that is all beer and very little Doritos.

"We had such a good time almost making that Huge Sports Match ad last year, we decided we'd stop at nothing to finally make our way into the Really Large American Football Contest in 2015. Even if we still can't afford it," says a spokesman for the brand in an email.