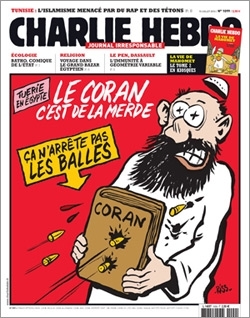 Although their motives are unclear, the magazine, which earned notoriety in the past by publishing cartoons depicting the prophet Muhammad, recently tweeted a cartoon mocking Abu Bakr al-Baghdadi, the leader and self-proclaimed caliph of the Middle Eastern terrorist group Islamic State.

According to witnesses and Paris police, three gunmen armed with AK-47 assault rifles stormed into the headquarters of Charlie Hebdo near the Place de Vosges in central Paris and opened fire in the lobby, hitting targets apparently at random, then shot two police officers, killing both, as they made their getaway in a car.

At the time of writing, police had located the getaway car but the assailants were still at large.

According to witnesses during the attack, the gunmen shouted: “We have avenged the prophet.” The magazine’s headquarters had previously been firebombed following its publication of cartoons that many Muslims said were disrespectful to the prophet Muhammad.

French President Francois Hollande called an emergency cabinet meeting Wednesday afternoon in response to the attack, which he condemned as “an exceptional act of barbarism committed against a newspaper.”

In a tweet, British Prime Minister David Cameron stated: “The murders in Paris are sickening. We stand with the French people in the fight against terror and defending the freedom of the press.” German Chancellor Angela Merkel also condemned the attack in a letter of condolence to President Hollande.

The attack comes amid mounting tension in Europe over immigrant populations, especially large Muslim communities, whom some Europeans say are failing to adopt liberal values in areas such as free speech, tolerance, and women’s rights, thereby nurturing potential extremists.

France has the largest Muslim population in Europe, numbering around 5 million, for 8% of a total population of 65.5 million. Many of these are immigrants are from poor parts of North Africa,  like Algeria, with established jihadist movements. Recently, France has also received refugees from Syria, a former French colony and the home territory of Islamic State.