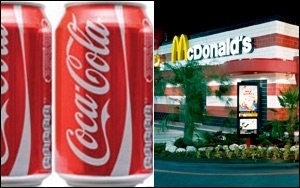 Coca-Cola Thursday morning announced that it will eliminate at least 1,600 to 1,800 jobs across its global operations, as part of a $3-billion cost-cutting plan it announced last October.

The company, which has a total global employee count of about 130,000, said it started notifying some affected workers today, and will implement the full cuts over the coming months, reported The Wall Street Journal. It noted that it is still finalizing some operational changes, and did not rule out the possibility of more job cuts than the number range identified "at this time."

The announcement confirms WSJ's late December report that Coca-Cola was planning to cut 1,000 to 2,000 jobs in the coming weeks.

It also comes on the heels of McDonald's' confirmation that it's cutting 63 employees in its corporate operations as of Feb. 16, and will also make a so-far undisclosed number of additional U.S. job cuts in the first quarter, as part of its own, $100-million, cost-cutting plan.

As previously reported in Marketing Daily, both of the giants have been under mounting pressure after a series of tough financial quarters.

Coca-Cola, facing continuing declines in North American sales volumes and new challenges in the emerging markets that had bolstered its performance for years, announced as part of its third quarter report last October that it would expand its productivity initiatives and refranchise its company-owned bottling territories in order to cut $3 billion in costs through 2019 — up from the $1 billion by 2016 in savings it had announced in February 2014.

Also in October — just days after it reported the weaker-than-expected Q3 results and warned that it would miss its long-term profit growth targets in 2014 and 2015 — Coca-Cola unexpectedly announced that Joe Tripodi, who had been chief marketing and commercial officer since 2007, would retire at the end of 2014. Tripodi's successor is Marcos de Quinto, who had most recently served as president of the Iberia Business Unit and VP of the Europe Group.

In December, some former Coca-Cola executives told WSJ that the company's "bloated" structure often slowed decision-making processes, that marketing and legal teams function in silos, and that it's often unclear who has decision-making authority.