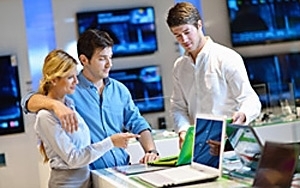 As new categories emerge (and technology in old categories continues to advance), consumer demand for electronics will continue its rise through 2015.

According to the Consumer Electronics Association, industry revenues are expected to reach an all-time high of $223 billion next year, an increase of 3% over 2014. That percentage growth is steady with the growth from 2013 to 2014, says Shawn DuBravac, chief economist for the CEA.

“Things have started to accelerate coming off of the recession, and we expect that momentum to continue into 2015 as well,” DuBravac tells Marketing Daily.

In addition to traditional products such as televisions, smartphones and tablets, emerging technologies such as 3D printers, ultra-high-definition televisions, connected home devices and wearables are expected to show strong growth through the year. Though less than 5% of the total forecast, these products will account for $11 billion in total revenue for the year.

Wearables (such as smartwatches, smart eyewear and health and fitness devices) will account for most of those increases, with revenues projected at $5.1 billion in 2015 (an increase of 133% over 2014).

“[Wearable] ownership rates are still relatively low, but the growth rate is phenomenal,” DuBravac says. “New categories were developed and introduced into the market in 2014, and we expect that to continue into 2015.”

Revenues for 4K ultra-high-definition displays will also increase significantly, accounting for about $5 billion in revenue in 2015 (up 106% from 2014). Television sales in general will be the third-largest contributor to total revenues, expected to reach $18.3 billion in 2015 (including the $5 billion from 4K televisions).

The largest categories, however, remain mobile connected devices, specifically smartphones and tablets. Combined the two device categories will account for about a third (34%) of total industry revenue. Though revenue growth has slowed for the categories, increases will come from higher unit sales. Smartphone shipments are expected to increase 6% in 2015 (with a 5% revenue growth), while tablet unit sales will increase 3%, with revenues of nearly $25 billion (down 1%).

"Shopping for Electronics" photo from Shutterstock.