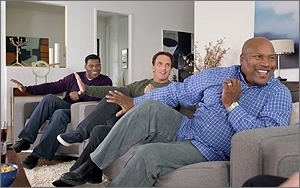 When a major sporting event is happening in your namesake stadium in the city you call home, you want to make sure the world knows it. AT&T is doing just that when it comes to Monday night’s College Football Playoff National Championship game.

On a national level, AT&T will have a heavy presence on the telecast tonight, airing a series of ads (from agency BBDO NY) that use football legends Joe Montana, Doug Flutie, Herschel Walker and Bo Jackson, as analogues for the company’s network strength. One spot, for instance, depicts the four greats watching a game on television. When they talk about a player’s physical strength, Walker notes you “can’t underestimate mental strength.” When Flutie asks for a demonstration, Walker wills Flutie into getting a snack from the kitchen, simply by staring him down. Another commercial has Flutie, Walker and Jackson showing off their Heisman poses, while Montana (who didn’t win the trophy) shows off his multiple Super Bowl rings.

“We always look into building contextually relevant ads into our campaigns,” Luckey says. “Leveraging the legends into this [campaign] helps lend credibility and relevancy into the college athletics we love.”

Meanwhile, in and around AT&T Stadium (where the game is being played) and Dallas and Arlington, Texas, more than 200 out-of-home pieces will talk up the company’s network, U-Verse packages and college sports sponsorship. Inside the stadium, fans will be treated to the AT&T LiveFX Board, a responsive LED display with 40 robotic mirrored louvers that rotate in a choreographed motion.

This is the second time in the past 12 months that AT&T has had a major NCAA championship in its backyard. Last April, the NCAA Basketball Championship game also took place in AT&T Stadium. The company pulled out all the stops then, too. “It’s been a banner year for AT&T for [college sports] sponsorships,” Luckey says.