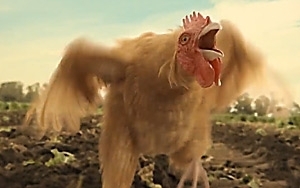 Thanks to Reebok, “Free Range” won't just be a description on your dinner menu anymore: It’s an all-encompassing fitness philosophy. While its competitors typically hype performance and star athletes, Reebok’s new effort stars a real-live chicken, sprung from captivity.

She fights her way out of the cage, the barn, and a cabbage patch, scrambles through a culvert and then bravely crosses the road, landing in a dusty ditch. Now on the outside, she turns up her beak at the regimented world of gym treadmills. Instead, she opts to follow a trio of trail runners and trots off under the “Live Free Range” tagline.

The online spot, part of a larger effort that will break in the weeks and months ahead, is intended to encourage people to embrace a different path to physical activity. “We’ve refocused the brand over the last several years on fitness for the everyday athlete, not just the pro,” says Yan Martin, Reebok’s VP/global brand communications. “Fitness isn't just about running faster; it’s a way to fulfill their full potential, to become a better person and to build social bonds.”

He tells Marketing Daily the effort is very much in keeping with Reebok’s marketing partnerships with CrossFit, which pushes ordinary mortals to flip tires and lug sandbags, and Spartan Races, obstacle events that encourage runners to crawl through mud and barbed wire, scale grease-covered walls and run a gladiator-lined gauntlet. “It’s the idea that the whole reason for fitness is to help people achieve greater things.”

In a way, he says, the new focus also moves the brand closer to its 1980s roots, “when we were really about empowering women to sweat.”

It’s the first major work created by Venables Bell & Partners since winning the Reebok business a year ago. Its previous agencies include DDB and McGarryBowen. “They were renowned agencies,” he says, “but with the new brand positioning, we felt we needed a partner with a fresh look.”

The campaign also includes a clever social component. Reebok fished through social media channels to find people with New Year’s resolutions that fit the Reebok philosophy, and then sent them a gift: A t-shirt printed with their very own resolution, packaged in egg-carton shaped packs, with an invitation to #LiveFreeRange.

Reebok has been owned by Adidas since 2006, and in its most recent results, the German parent company says Reebok’s sales rose 7% on a currency-neutral basis, driven by sales momentum in the fitness training, walking and fitness running categories.