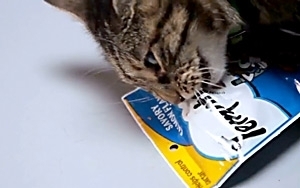 Mars Petcare’s Temptations brand is showing that so-called picky cats are anything but when it comes to the treats.

In a takeoff on reality TV, Adam & Eve DDB, London filmed and photographed 15 cats tearing into 43 packages of the treats. The result, themed “#PackAttack, is print, video, social media and out-of-home creative.

OOH breaks Jan. 19 and will run until mid-to-late February. OOH will be featured on bus shelters, gas pump toppers and highway billboards. Print broke Jan. 9 and will run in national magazines such as Star, People, All You, Parents, Redbook, Good Housekeeping, InStyle and US Weekly.

The treat brand was inspired to focus in on the zealous cat behavior after noticing a pattern of user-generated photos and videos of destroyed packs of cat treats, says Temptations Brand Manager Melodie Bolin

“The new #PackAttack campaign is something that cat owners can relate to, and it’s fun-loving in nature, just like the Temptations brand,” Bolin tells Marketing Daily.

The campaign aims to illustrate the irresistibility of the cat treats, which are showcased in the creative, and especially in the online making-of video that currently lives on YouTube.

The #PackAttack campaign takes a different approach from previous campaigns as it highlights existing and real consumer behavior around cats’ affinity for the product, she adds.

“We’re so excited about the campaign and hope cat lovers out there will continue to share their #PackAttack stories with us,” Bolin says.