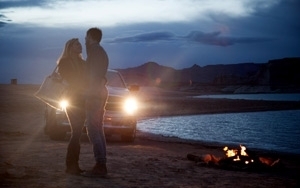 TrueCar, a Santa Monica, Calif.-based online car buying, selling, research and pricing site, is launching a new campaign featuring Owen Wilson. That’s right: the actor and screenwriter, who was Gwyneth Paltrow’s love interest in “The Royal Tenenbaums” (which he helped write), and Woody Allen's doppelganger in “Midnight in Paris,” is voicing a raft of new TV spots for the company. The effort is also the first for TrueCar that focuses almost exclusively on people and their cars, rather than on TrueCar and how it works.

The campaign, via AOR Santa Monica-based Tiny Rebellion, kicks off with 60-second, 30-second and 15-second digital and cable spots that, besides demonstrating how intrinsic cars are to Americans, tout TrueCar's mobile app.

While earlier TrueCar ads, such as those under the “Let's Talk Truth” banner, had been much more focused on getting the word out about the transparency of TrueCar data — visuals were of literally transparent graphs and charts appearing in midair above cars — the new work just touches on those themes. The launch creative for the new campaign doesn’t even mention TrueCar until around halfway into the ads.

Lucas Donat, CMO of TrueCar and CEO of Tiny Rebellion, which became the company's marketing arm in 2012, says the campaign is at its core a folksy appeal to younger buyers. “It’s a love song to automobiles. The idea is to celebrate how much we love our cars and the milestones they mark throughout our lives.” He tells Marketing Daily that the agency took a three-week road trip across the country to document important moments in peoples’ lives — moments that involve their cars and trucks. There are kids playing with toy cars, guys off-roading, first dates, and stunts. “People will talk about their car as if it’s a family member. We wanted to capture that.”

It's probably not a stretch to say Wilson does for TrueCar what Jeff Bridges did for Hyundai: make the brand approachable and affable. Donat says he was the right choice partly because of his popularity with Millennials, the people TrueCar wants to reach. “He is one of the most celebrated and beloved actors of our time, and he resonates with the burgeoning population of consumers who will be buying cars in a very different way than their parents and grandparents,” he says. “With Owen, the idea is to elevate the fun part of the brand: that car buying can be simple a fair and, quite frankly, fun.”

The ads end with a nod to the TrueCar app. “And the future of car buying is mobile,” says Donat.