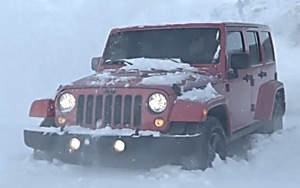 Jeep, which has had category exclusive sponsorship of the ESPN X-Games for 12 years, is launching a new campaign aligned with this year's winter X-Games at Snowmass in Aspen, Colo., Jan. 22 through 25.

Wrangler-X Edition SUV gets the focus, and the vehicle will be on display at the games. Jeep will also run an associated social-media effort on Facebook, YouTube, Twitter, and Jeep's Instagram accounts, with real time “behind the scenes” content, per a release. The automaker will also shuttle people back and forth to the event in a fleet of Jeep vehicles.

Though it extends Jeep’s X Games sponsorship, and will air on ESPN's coverage of the games, and on sibling network ABC (and on YouTube), the TV ad will air during the NFL’s NFC Championship game (NFL) on Fox this Sunday.

The spot starts with a view from orbit of a massive hurricane. We then zoom in  on the swirling eye. Then cut to a vortex reaching all the way to the ground in some frozen wilderness. What's causing it all? A couple of young guys in a Wrangler X Edition doing donuts in the snow. The spot calls out Jeep's sponsorship of the Games. Tag: “Take Winter by Storm.”

Jeep says ESPN and ABC will televise a 16 hours of live competition, with ESPN3 running 18 hours of competition and music performances. The coverage, and therefore Jeep's presence, extends to ESPN's XGames.com, X Games app, and X Games pages across Twitter, Facebook and Instagram. ABC will run four hours of additional programming after the Games, on Jan. 31, plus a one-hour special on “World of X Games: Best of Aspen” on Feb 7. Jeep is also running a print spread in the Jan. 5 ESPN The Magazine, per the statement.