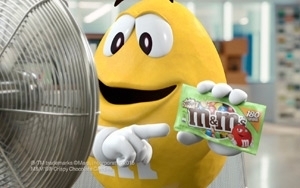 A 15-second TV spot for the Crispy variety from BBDO New York debuted on NBC's Golden Globes Awards broadcast on Jan. 11, as well as on YouTube and the brand's Facebook and Twitter accounts.

The creative shows the M&M’s brand character "Red" instructing fellow character "Yellow" to “tell our fans” that the crispy-centered variety of M&M’s is back. Yellow takes the cue literally, spreading the message to a series of inanimate fans — oscillating, folding and ceiling — in M&M’s' offices.

The brand said that it decided to bring back Crispy, which was made as a limited-edition variety between 1998 and 2005, because it's the discontinued variety that has generated the most consumer requests for revival over the past decade. (Diehard Crispy lovers have been having the candy shipped to them from other countries where it was never discontinued, including Australia, according to M&M's.)

The Crispy relaunch is designed to appeal both to new prospects and to those who enjoyed Crispy during its original run, including Millennials who remember it from their childhoods or teens.

As in cereal, carbonated beverages and other categories, consumers' love of nostalgia and comfort foods has become an increasingly important driver within the confections category, spurring new flavors (like ones inspired by peanut butter and jelly sandwiches), relaunches like Crispy, and retro-oriented marketing and packaging for existing brands.

Between announcing the coming Crispy relaunch last October and the candy's actual national availability at retail this month, M&M's fed the anticipation and kept fans engaged by releasing a series of "special delivery" videos.

In one video, M&M's surprised a Crispy lover by making her suburban Chicago home the only one in the U.S. to be able to offer packages of Crispy for Halloween trick or treating — doubling her glee by having retired Chicago Bulls basketball star Scottie Pippen deliver the candy packets to her. That video has yielded more than 225,000 views on YouTube to date.

In another, released in November (currently showing nearly 262,000 YouTube views), a fan who said she wanted Crispy "faster" received a delivery of the candies from NASCAR's Kyle Busch, driving the M&M's-sponsored No. 18 Toyota Camry.

The biggest draw — with 1.26 million YouTube views since its posting in mid-December — was a video showing pop singer Jessica Sanchez visiting the homes of friends, family and Crispy fans in her home town of Chula Vista, Calif. to sing Christmas carols and distribute packets of Crispy.

In addition, M&M's sent pre-launch surprise packages of Crispy to consumers who had been particularly passionate in expressing their love of the variety on social media.

Also during December, Vanessa Williams, the voice of the M&M's character "Ms. Brown," appeared at the M&M's World New York to promote the availability of a limited batch of Crispy for sale there, prior to the line's national rollout.

Mars declined to reveal more about upcoming 2015 efforts for Crispy, other than to confirm that the "fully integrated" marketing campaign around the relaunch will be M&M's' biggest since the one supporting its 2010 launch of its (very successful) pretzel line.