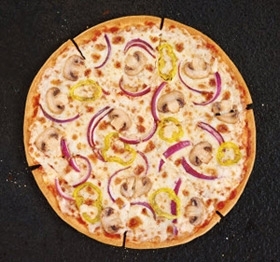 Gluten-free options are expanding even into pizza and beer.

The cheese-only and pepperoni gluten-free varieties have 150 and 170 calories per slice, respectively.

The crusts are being supplied by leading gluten-free brand Udi's.

The Gluten Intolerance Group, a nonprofit verification organization, helped Pizza Hut establish in-store preparation procedures and training. The gluten-free crusts and other ingredients will be kept in separate, designated areas, and staff prepping the pizzas will wear gloves, bake on parchment paper and use a special pizza cutter. Still, Pizza Hut is advising customers to check with their doctors, since the restaurant environments as a whole aren't gluten-free.

For customers looking to reduce rather than completely avoid gluten, Pizza Hut will offer pizzas prepared on the gluten-free crust, topped with select ingredients.

Marketing for the gluten-free launch will include public relations, promotion on Pizza Hut's Facebook, Twitter and other social media sites, and paid digital advertising, according to a brand spokesperson. No television advertising is planned at this time.

Rival chain Domino's has been offering a gluten-free crust since 2012, but doesn't claim that the overall pizzas are gluten-free. Some packaged foods brands, including Pillsbury and Amy's, also offer gluten-free pizzas and/or crusts.

Meanwhile, MillerCoors has announced that it will begin offering a naturally gluten-free version (made with brown rice and pea protein instead of barley) of its Coors Peak Copper Lager, although only in Seattle and Portland, Ore.

All gluten-free segments showed growth, with snacks logging the biggest increase: up 163%, to $2.8 billion, driven by a 456% jump in potato chips. The second-largest segment, meats and meat alternatives, grew 14%, to $1.6 billion. Sales of gluten-free bread and cereal products increased 43%, and are expected to reach $1.3 billion this year. Mintel notes that bread and cereal are "ripe for gluten-free growth," since just 1% of these products are currently gluten-free.