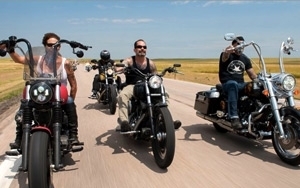 It has to be one of the longest-term sponsorship agreements ever, but it might also be the least surprising: Harley-Davidson and the city of Sturgis, S.D. have inked a deal timed with the 75th Sturgis Motorcycle Rally this year, making Harley-Davidson the official motorcycle of the rally. For the next 75 years. At which point motorcycles will probably fly.

The majority of people who ride to Sturgis ride Harley-Davidsons, and Harley has had a big presence there for years. The rally, just "Sturgis" to most people, is also the inspiration for Harley's Project Rushmore line of motorcycles (you kind of have to do obeisance at Mt. Rushmore if you're going to Sturgis.)

Said Matt Levatich, COO at Harley-Davidson, in a statement: "Riding is a passion passed down through generations, so it's important we celebrate the legacy and history of Harley-Davidson in Sturgis, while helping create new memories."

The partnership makes Harley’s footprint in Sturgis permanent: there will be a Harley-Davidson-branded plaza on Main Street built with some of the bricks from the company's century-old headquarters in Milwaukee. The venue will have a stage for concerts, and events year round. The partners say it will be completed in time for this year's 75th Rally.

"For decades, Harley-Davidson has been the motorcycle of choice for Sturgis Motorcycle Rally fans and a great partner to the city of Sturgis," said Sturgis Mayor Mark Carstensen.

At an event in Milwaukee announcing the partnership, executives removed a brick from the front entrance of its building. The company says that the brick, along with one from the Harley-Davidson Museum, and 73 bricks from the headquarters' motorcycle-only parking area will be delivered to Sturgis on Harley-Davidson motorcycles.

The other giant bike rally in the U.S. is Daytona Beach Bike Week, in March. But it's a different animal. Since the rally is concurrent with motorcycle racing events at Daytona International Speedway, it appeals not only to traditional rally-goers riding cruisers and touring bikes, but to street and performance bike fans.

Robert Doyle, editor of MotoSavvy.com, says Sturgis is unique not only for its size, but because of where it sits in the calendar and its iconic status — not a little of which has to do with its Wild West persona. “Daytona might be bigger, and they have the races and the big sport-bike contingent,” he says, “But chances are that even the guy in a minivan knows about Sturgis. It's known by the general public. But beyond riders and fans, not as many people know about Bike Week.”

The other difference, he notes, is that Sturgis is as much about the journey getting there as actually being there, because getting there means riding through ideal motorcycle country: empty rolling hills and badlands. “Sturgis is always in August every year, so a lot of people ride to it.” Reportedly about half the people who come to the town of just over 9,000 ride there for the rally. Doyle says the Daytona rally, because it's in March, has fewer ride-ins. Sturgis estimates last year's attendance numbers were about 440,000, a long way from its high-water mark of around 600,000 in 2000. Besides Harley-Davidson, Chevrolet, Coca-Cola, Budweiser, Geico Motorcycle, are major sponsors of the Sturgis rally.