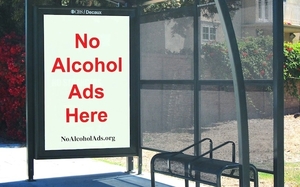 The Los Angeles City Council will vote Tuesday on an ordinance that will ban alcohol ads on city-owned and -controlled property.

Despite claims of economic necessity, revenue from alcohol ads comprises less than 1% of reporting agencies' operating revenue, according to the coalition. Lawmakers should work to ban alcohol advertising on property that government controls, including school buildings, recreation centers, libraries and bus shelters, according to the group.

A study of 26 major U.S. transit markets conducted by advocacy group Alcohol Justice found that half of them allowed alcohol advertising, while the other half banned it in some way. Transit in Honolulu, San Francisco, Philadelphia, Washington and Baltimore is alcohol-free, while transit in New York City, Denver and Minneapolis isn't.

The UCLA Center for Alcohol Marketing to Youth submitted evidence that alcohol advertising on city-owned property encourages youth alcohol consumption. The L.A. County Department of Public Health has recommended reducing alcohol advertising in public spaces and in areas commonly seen by minors as a way to help discourage underage drinking.

Former Massachusetts First Lady Kitty Dukakis supports the ordinance and will speak at a press conference held by the coalition prior to the city council meeting.