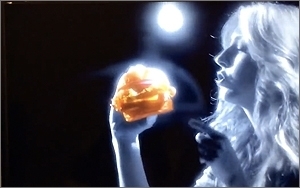 Hard to believe it nowadays, but ads matter, even among Millennials. The top ad last year, based on Nielsen's "Branded Memorability Index" measure of viewers' ability to recall an ad and brand 24 hours after exposure, was Wendy's Pretzel Bacon Cheeseburger. The "Be With You" ad, directed by Jeffrey Fleisig at Ubercontent, who has done humorous, irreverent ads for the likes of VW, Axe, Pepsi Zero, Sprite, and Progressive, was also the top spot among Hispanics and Asian-American Millennials.

Wendy’s ad was emblematic of a larger trend, per Nielsen. The media measurement firm said that in general, fast food and quick-service restaurant ads dominated among Millennials for memorability. Among the top 10 ads (based on Nielsen’s TV Brand Effect measure), fast food and quick-service constituted six. Fast food was also the second-highest-ranking product category based on ad spend last year. Automotive, pharmaceutical and motion picture categories were also top spenders.

The firm also found that across all categories, ads that featured humor or had an “ownable” campaign concept were top performers last year among those between 18 to 33 years of age.