Omelet Cooks Up Campaign For Gardein 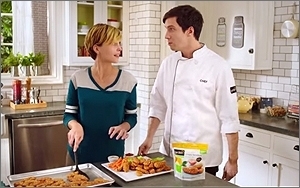 One in three Americans say they are eating vegan/vegetarian meals more often, adding to the 16 million people who adhere to meatless diets, according to the Vegetarian Resource Group.

Now, Gardein -- a meatless food brand owned by Pinnacle Foods -- is launching its first national awareness campaign to cater to these individuals and help position it as a mainstream, well-known brand.

"The meatless category has gone mainstream and as the fastest-growing brand, we recognized the opportunity to get ahead of the curve in a way that's innovative and shakes things up a little bit," says Russell Barnett, chief marketing officer at Gardein. "It’s also the beginning of the year and consumers are starting fresh, which makes it a great time to teach them that healthy, meat-free options can be easy and delicious."

Developed by Los Angeles-based agency Omelet, the campaign uses the tagline “Inspired by Chef. Crushed by You.” to illustrate how anyone can create delicious, easy, and convenient plant protein meals, courtesy of Gardein.

“Gardein came to us looking to break through in the meat-free category with something that matches their playful and innovative brand personality. This campaign does that while also emphasizing how relatable and craveable the products really are,” said Sarah Anderson, Omelet’s Chief Creative Officer.

The agency designed the campaign to make plant protein accessible to the masses by featuring a guy named “Chef,” a personification of the brand, who is meant to be fun, relatable, and instantly likable. Chef is designed to be a favorite inspiration in the kitchen, but despite his name, that’s not what he does. Instead, Chef provides quick-witted, playful, and genuine “inspiration” to crush any meal.

The campaign kicks off with three videos running in online media. To support the spots, fans are invited to visit Gardein.com/MeetChef to download a coupon for $1-off all products.

While these ads are meant to have widespread appeal, the campaign is particularly aimed at healthy and active consumers who are looking for healthier versions of the food they already love, say executives. “We want to educate people on the power of plant protein and take down the intimidation while we’re at it,” says Barnett. “We were so impressed by Omelet’s strategic insight and creative bravado, taking food advertising to a non-traditional yet very relatable place. We’re excited to debut a campaign that perfectly aligns the brand as a tasty and healthier option within meat-eating occasions.”

Still, creating this campaign wasn't without its difficulties.

"The meat-free lifestyle has gained incredible momentum in recent years but we still faced the challenge of finding a tone for the campaign that mainstream consumers would understand," says Barnett. "On top of that, we had a very particular vision for Chef since his character is so uniquely positive and inspiring. Casting that role was more difficult than you might imagine but we’re thrilled with who we chose."

Gardein is available at over 22,000 retail locations as well as over 5,000 restaurants and 100 colleges and universities across North America. In November, Pinnacle Foods Inc. acquired the Canadian maker of plant-based, vegan and vegetarian foods for $154 million.