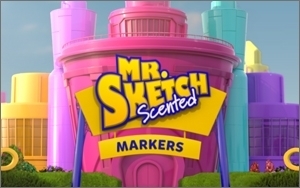 Newell Rubbermaid is increasing advertising and promotion by over $50 million in 2015, with the majority of the incremental investment occurring in the first six months of the year.

One brand to benefit from this extra expenditure is Mr. Sketch Scented Markers. Last summer, agency BBH New York introduced the TV commercial “Blueberry,” which generated a resurgence in buzz about the "nostalgic" marker scents. It was the first TV ad for the brand.

Now, BBH NY is launching MrSketch.com, a new interactive Web site that invites fans to join in the "scent extraction process" in a multimedia environment.

"The client goals are ambitious," says Gerard Caputo, group creative director, BBH New York. "The brand doubled its ad budget and we're pleased to see how well it's paid off. Brand awareness jumped 18% since the back-to-school campaign launched and Mr. Sketch's share in the "youth art markers" category has increased four times since then. Our promotion of Mr. Sketch has expanded across multiple channels, giving consumers an opportunity to experience the various layers and offerings of the products in a fun way."

"Mr. Sketch already has a very loyal fan base," says Caputo. "The next evolution of that was to deepen that relationship with them and bring new consumers into the fold. So in this integrated Web site lives a broader spectrum for opportunities to connect with the brand and products."

The site's concept features a factory where fans become part of the fruitful journey by selecting a fruit and watching it move through the experience. They can create their own scented symphony using six different "toot-happy fruits" from the blueberry to the wild watermelon playing over three optional musical tracks. While the fruits toot (as users tap, click or press keys on the keyboard), every scent released is collected and analyzed to ensure maximum "smellability." They are able to create music by clicking on different fruits and tunes, and then can share their musical creation with friends and family.

In addition to Toot Tunes, users are able to download coloring books and watch original video content. "Everything we do has to formulate from a strategy," says Caputo. "There has been a multi-step evolution of the brand campaign to get us to where we are today with the new Web site. The interactive factory offers simple yet engaging interactions. It isn't overly complicated, but it's fun. The idea is to not create an overly immersive or laborious experience. Instead, fans should leave feeling good about the brand."

BBH NY also designed the interactive site to expand beyond desktop to both tablet and mobile to ensure maximum usability. "The objective behind the campaign was to reintroduce the brand, generate awareness, extend the experience in new ways and ultimately create love for the brand beyond teachers, parents and kids," says Caputo.

Mr. Sketch Scented Markers is part of the Newell Rubbermaid global Writing portfolio. Some 21% of its sales in writing in North America account for 90% of its revenue, the company says.

In 2014, Newell Rubbermaid also increased its total ad budget by $50 million. Collectively, the brand separates its ad spending into two categories: Cooperative advertising with customers totaled $117.7 million, $117.6 million and $118.3 million for 2013, 2012 and 2011, respectively. All other advertising costs are recorded in selling, general and administrative expenses and totaled $153.8 million, $143.6 million and $151.2 million in 2013, 2012 and 2011, respectively, according to company financial filings.

BBH NY has worked as the creative agency for Newell Rubbermaid since October 2013 and works across all of its consumer brands.