Super Bowl Winner? This Year, Odds Are On Daddy 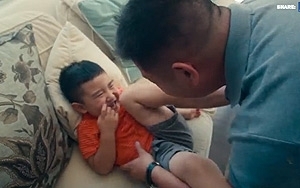 Unilever’s Dove Men+ Care has just released its Super Bowl XLIX spot, and get ready to snivel. It’s 60 seconds of sweet snippets of the tiny acts of heroism dads perform for kids, rescuing them from monkey bars, tangled up T-shirts, and late-night automotive problems. Considering how closely it parallels the storyline previewed by Toyota for its Super Bowl ad, it’s looking like dads will leave the Big Game a winner, no matter what happens between the New England Patriots and Seattle Seahawks.

The Dove Men+Care spot is a slightly retooled version of its Father’s Day ad, and takes the brand’s men-are-softies positioning one step further, with a social media twist. In releasing the spot, Unilever says that “90% of men around the world say that their caring side is part of their masculinity and strength. Let’s acknowledge the caring side of men and celebrate their #RealStrength as a true sign of masculinity.”

It follows a weekend of 60 All Pro Dad workshops around the country, in partnership with Dove Men+Care, Walmart’s Sam’s Club division and Family First. The All Pro Dad program, which has worked closely with NFL players and coaches, gives dads ideas about how to better connect with their kids.

And when you combine Dove and Toyota with the tone set last year by Cheerios (the reigning champion of awesome-Dad theater, what with last Super Bowl’s acclaimed Gracie, Canada’s clever #HowToDad and gay dads) and it’s safe to say fatherhood is having a moment — maybe even one as big as moms experienced from Procter & Gamble’s massive “Thank You, Mom,” linked to the Olympics.

“This has been building for some time, and it’s because marketers are finally understanding that it’s not so much what mom does or what dad does, but about how families operate,” says Missy Denja Maher, EVP of consumer brands at Edelman in Chicago. “Marketers are getting to be much more savvy about opening up their consideration set. They’re moving beyond this idea of dads as just some bumbling Homer Simpson types, and waking up to the idea that dads really are relevant.”

“Obviously, fatherhood has always been important,” says Darrin Gray, director of partnerships at Family First, “but what’s happening now is that lot of people are recognizing that fatherhood is essential. And, yes, there are lots of single moms out there doing a great job, but dads matter.” He says messages are also evolving to address the whole “messy ecosystem of fatherhood these days, single dads, divorced dads. They’re involved. They want to be competent fathers.”

Perhaps heightening the poignancy of these tender moments this year is that the NFL is struggling with the lingering ugliness of the Ray Rice domestic violence controversy, and the suspension of Adrian Peterson, one of its superstars, for child abuse.

Because of that, says Maher, who is also director of Edelman’s Modern Family Foresight, it’s clear that marketers are “being very careful, making sure the messages they put out there are sensitive, and family friendly.”