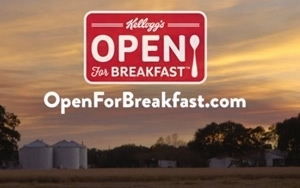 In the latest example of major brands' focus on conveying that they're listening and responding to the so-called "voice of the consumer," the Kellogg Company has launched "Open for Breakfast" in the U.S.

The company describes the initiative as an "open forum in the digital and social media space to hear what’s on peoples’ minds and share stories about Kellogg’s branded food, its commitments to communities around the world and its pledge to care for the environment."

The campaign reflects the reality that "more than ever, people want to know what's in their food, how it's made and what companies are doing to contribute to a better world," sums up Kellogg.

"With Open For Breakfast, we want to earn a seat at peoples’ breakfast tables by opening up and showing how we’re working to make their mornings better," said Noel Geoffroy, SVP, Morning Foods Marketing & Innovation for the company. The initiative is "our promise to be available for deeper, real-time conversations about the ways we can continue to improve," he added.

The campaign is, of course, also the latest marketing effort by a major cereal maker to help jumpstart the growth of cold cereals, which have seen declining consumption and basically flat sales since 2008, thanks mostly to a shift to protein-heavy, portable breakfast options like Greek yogurt and wraps.

And, in its basic "forum" concept, the Kellogg's campaign is reminiscent of McDonald's' recently launched "Our Food. Your Questions" campaign — although McDonald's is seeking to counter a whole different level of negative buzz and myths surrounding its food's origins and preparation.

Kellogg is inviting consumers to ask questions and engage in conversation through social media and OpenforBreakfast.com, which features a link to a form used to submit questions (registration, including email address, is required).

The company is also using the platforms to offer content highlighting facts and statistics about the nutritional benefits of Kellogg products and breakfast cereal in general ("Only 4% of daily added sugar comes from breakfast cereal"); and Kellogg's sustainability and community initiatives ("We've pledged to responsibly source 10 priority ingredients and materials by 2020").

The formats being used include infographics and a series of videos.

The launch video, which is viewable on YouTube as well as the hub site and Kellogg's social media assets, shows consumers talking about the nutritional and sustainability concerns behind their decisions about which foods to buy. A father says that his biggest concern about his kids' nutrition is the refined sugar in "just about everything"; several people stress that they want to know what's in food; and one woman notes: "I would love for Kellogg's to come out and let me know what they're going to do for me."

Future videos will feature Kellogg employees and third parties including nutritionists, teachers and farmers, as well as consumers, according to Kellogg.