How'd He Do? Larry Wilmore Joins The Late-Night Club 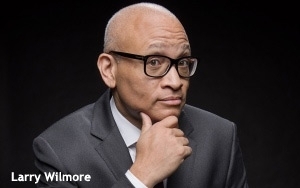 Maybe they should have kept the “Minority Report” title, because the new “Nightly Show with Larry Wilmore” on Comedy Central looks to be shaping up as a nightly discourse on race relations.

Whether we need such a discussion at 11:30 every night is a matter of personal taste. My own take is that a single-topic talk show will get old fast -- especially if the single topic isn’t handled comedically, which is what people expect from their late-night shows.

It’s not easy to balance so-called “serious” issues with comedy, but when a show is successful at this balancing act, it becomes, well, “The Colbert Report” or “The Daily Show.”

“The Nightly Show with Larry Wilmore” -- which was called “The Minority Report” when it was first announced last year -- is the replacement for “Colbert,” but in its premiere last night, it was hardly up to the “Colbert” standard.

The show came across as flat, uninspired, unoriginal and unimaginative -- which often happens on opening night (and often continues too, although time will tell).

These were Wilmore’s first words, with which he opened his first show: “Tonightly [sic], the Oscar nominations are out and they’re so white, a grand jury has decided not to indict them!” What this joke needed to put it over the top was a rimshot, but unfortunately there’s no band on this late-night show to help out the host.

The studio audience laughed uproariously (although I suspect they were coached to do so). Wilmore then made a joke about Oprah Winfrey’s march on Selma on Monday (Martin Luther King Day) and then listed these upcoming discussion topics: “Yeah –- we talk Selma, Ferguson and Eric Garner,” Wilmore said. “It’s Comedy Central’s worst nightmare -- brother finally gets a show on late-night TV!” Arsenio Hall might quibble with that statement, but that’s his problem.

Wilmore then joked about having to work on MLK Day, but choosing this holiday to launch a comedy talk show about race must have been irresistible for a show fixated on the subject.

Wilmore also made jokes about the Eric Garner case, in particular the quotation from Garner while he was being held down by police on a Staten Island sidewalk in which he cried, “I can’t breathe!” When the audience groaned about the jokes, Wilmore jokingly asked if it’s “too soon” –- the now customary comedian’s rejoinder after an audience rejects a joke about a tragedy. Yes, Wilmore’s Garner jokes were “too soon,” and also tasteless.

Last year’s (and to some extent, this year’s) widespread protests over the chokehold death of Garner and the fatal shooting by police of Michael Brown in Ferguson, Mo., were the subject of a discussion Wilmore then held with four guests, “panelists” in the style of “Real Time with Bill Maher” although not as entertaining.

The panel for Night One of “The Nightly Show” comprised two black men, one Indian woman and one white comedian. They were New Jersey Sen. Cory Booker; Bill Burr (the white comedian), who appears in “Black Or White,” a new movie about race starring Kevin Costner; Talib Kweli, described as a “hip-hop artist and activist”; and Shenaz Treasury, identified as a “ ‘Nightly Show’ contributor.”

This discussion was a dull waste of time in which nothing interesting was either learned or said. Oh, I just remembered one thing: Sen. Booker said he thinks too many people are in prison serving lengthy sentences that don’t fit their crimes. He said society places too much emphasis on incarceration and too little on addressing the root causes of antisocial behavior -- “causes” such as poverty, substandard schools and, generally speaking, a lack of opportunity for some.

Yes, we can debate this from now ’til doomsday, but where’s the comedy? On “The Nightly Show,” it was in short supply.

Wilmore ended his first show by inviting viewers to submit questions to him via social media -- from which he promised to choose one each day to answer honestly at the conclusion of every show. By necessity, last night’s question was crafted by one of the show’s writers. Surprise, surprise -- it was about race. The question was: “What was the last racist thought you had?” Wilmore recited it and then answered it.

“I think it was walking down the street yesterday,” he said, “and I’m like, ‘Does that white woman think I’m gonna steal her purse’?”

Really, Larry? Do you really think a white woman thinks YOU will steal her purse? You’re a 53-year-old man who couldn’t look less threatening. Or, more to the point, is this what we’re in for every night on “The Nightly Show”?

“The Nightly Show with Larry Wilmore” airs Monday through Thursday at 11:30 p.m. Eastern on Comedy Central

tv
2 comments about "How'd He Do? Larry Wilmore Joins The Late-Night Club".
Check to receive email when comments are posted.
Read more comments >
Next story loading