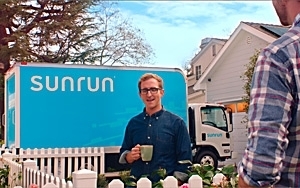 Now, residential solar power company Sunrun and agency BBSP are launching a new awareness campaign debunking these myths through a series of natural and funny conversations between two neighbors.

“With a pair of real guys as the anchor, the ads show how mainstream solar is becoming and also how easy it is to save money when you sign up with Sunrun solar,” said Michael Grasso, chief marketing officer at Sunrun.

BSSP worked with production company Gifted Youth, a division of Funny or Die, and director Jason Winer, to introduce a campaign that attempts to debunk misconceptions about solar energy, yet is rooted in comedy that creates a distinctive voice for the Sunrun brand.

“The thought being, if we can laugh at the misperceptions, and we can relate to those guys, we can relate to solar power. Because, really, home solar is about being smart and saving money,” explained Josh Leutz, creative director at BSSP.

The two actors in the spots — selected for their improv skills — carry on typical neighborly conversations held at the kitchen counter and in the garden. After one tells his neighbor he has Sunrun solar panels installed on his roof, he jokes that he “smells like money," given the savings he’ll achieve in energy costs compared to his non-solar panel neighbor.

“Everyone thinks you can just hire funny people and let them do their thing, and maybe that’s partially true," says director Jason Winer. "But the goal is to take good material and elevate it to great material, and doing that requires an understanding of what makes a given moment funny. Once you really understand that, then writing alternate jokes becomes easy and improvisation becomes a much more focused tool."

The ads can be viewed here.

The campaign first debuts with two ads in regional California markets and will expand later this year with additional spots in other markets. This rollout is also part of a larger initiative that will include radio, out of home, online video, and display to build awareness of Sunrun and drive leads.

This campaign comes at a critical point for the company as the solar industry has less than two years before the subsidy 30% Investment Tax Credit (ITC) expires at the end of 2016. When Europe cut its subsidies last year, for instance, the solar power markets is Germany, Spain and Italy essentially collapsed.