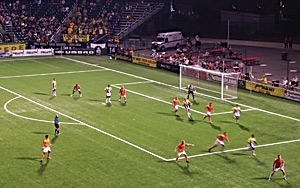 While soccer is growing in popularity in the U.S., it can still be a challenge to quickly find and round up like-minded fans for a match meet-up.

Called the NBC Sports MatchMaker, the app is designed to help soccer fans, particularly fans of teams in the Premier League—for which NBC is the exclusive U.S. rights holder—to organize game time get-togethers, set reminders for games and stay current with the latest Premier League stats, scores and breaking news.

Naked is credited for coming up with the idea and the strategy behind it, while Papercloud came up with the user interface design and technical development. Both shops share credit for developing the "user experience."

“Ever since NBC Sports Group’s Premier League coverage kicked off last season, we’ve been working on new ways to bring U.S. fans closer to the sport,” said Bill Bergofin, SVP, Marketing, NBC Sports. “Now fans have another outlet to connect with and 'meet up with their mates' wherever they may be.”

The app can locate fans in real time on an interactive map and find the best bars and restaurants (based on fan voting) to watch matches.  It can also send out invites via its “match, friend and venue picker.” Users can conduct group chats with anyone invited to a meet-up. Match and telecast schedules can be viewed as well as news and highlights from ProSoccerTalk on NBCSports.com.

And brands can market to the app’s users via an “exclusive offers” feature.

“Diehards know the only thing better than watching [soccer] is watching it surrounded by other fans,” said Matt Houltham, Managing Partner of Naked Communications. But sometimes, finding other fans to watch with can be a challenge. ‘MatchMaker’ solves that problem.”