2015 Will See The Rise Of Dark Social 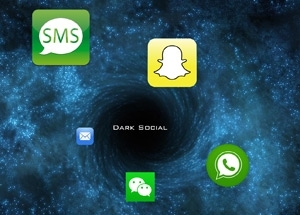 Dark social is the sharing activity that is somewhat invisible to traditional analytics. It’s the culmination of referrals and sharing of content that originates from instant messages, e-mails containing links, and most recently, the rise of ephemeral social communication platforms such as Snapchat, WeChat and WhatsApp.

A majority of focus today is on social broadcast platforms such as Facebook and Twitter. With the tides shifting toward ephemeral social communication applications as a key driver of sharing, the attribution data of the share — and all of the value that comes with it — is essentially untapped and, in some cases, simply unknown.

According to a recent Radium One study, 59% of all online sharing is via dark social. Further, a whopping 91% of Americans regularly share information via dark social methods. This study also showed that 72% of sharing is simply users copying and pasting long URLs and either e-mailing or texting the information.

There are a significant number of conversations -- and more importantly, potential intent -- from a marketing perspective that is simply being ignored and untapped. Currently, there’s an over-reliance on retargeting. Dark social could represent an opportunity to bring balance to the equation.

What makes cracking the code with dark social in 2015 even more paramount is the sharp rise in adoption of ephemerally charged, socially centric communication apps such as Snapchat, WhatsApp, WeChat and Kik. The convergence of social and mobile is here and the percentage of content shared through dark social will continue to rise at an exponential rate in 2015.

A few pioneering brands have incorporated sharing functionality with the Facebook-owned WhatsApp, which has over 400 million users sending 50 billion messages a day. FTW, a USA Today sports site, introduced a WhatsApp sharing button to its mobile experience recently, and almost immediately saw shares from WhatsApp climb to 18% of the site’s overall sharing activity. Further, 53% of shares came from “dark social” vs. 47% through traditional social mechanisms.

SnapChat, another ephemeral application, is the fastest-growing social app heading into 2015. With a user base 100 million active users, 60% of whom engage with the app 22 times per day, Snapchat represents another dark social platform that should be considered in 2015. This is especially true with the upcoming strategic partnership model that will incorporate multiple media outlets into the platform. This will convert the experience to include more content from external networks and publishing partners.

And there’s Wechat, with a global audience of 600 million users, 180 million outside of China. It is the fifth most-used smartphone app worldwide. All of these essentially represent the next wave of dark social that will quickly raise dark social sharing's current percentage of 59% of total sharing even higher in 2015.

Outside of the applications listed above, there are many more that are growing quickly, including Kik. Even Apple’s AirDrop is being used to share images and messages with school-age kids.

And there are more on the way — hybrids of the hybrids — like Mark Cuban's Cyber Dust, which essentially combines elements of WhatsApp and Snapchat, boasts high levels of privacy and security, and is, as Cuban recently commented,  “troll-proof.”

Moving forward, there are ways to begin building a dark social strategy. In addition to simply relying on URL-shortened links, brands can employ advanced Google Analytics against long-form links.

It’s also important to consider what integration options are available from the social communication providers themselves, the type of data and analytics available, and how these will be aligned with existing measurement framework.

Taking these steps  will ensure that while we’re testing and learning, we can begin to formulate how these platforms will go from experimental to a reliable part of the marketing mix.

Understanding how content is shared when not immediately visible will be a key metric in 2015. Dark social is on the rise, and the more we can harness its power, the faster we can build connections and leverage intent to drive conversions.

social media
1 comment about "2015 Will See The Rise Of Dark Social ".
Check to receive email when comments are posted.
Next story loading