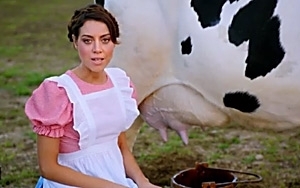 Newcastle Brown Ale continues to milk -- literally -- the buzz leading up to the Super Bowl for all it’s worth.

The beer brand’s latest ploy for attention is a teaser for Newcastle’s “Band of Brands” ad, in which terminally deadpan Aubrey Plaza milks a cow as she explains how the program works.

The “Parks and Recreation” actress, dressed in an old-fashioned milkmaid costume, is trying to help Newcastle recruit corporate partners for the first-ever crowdfunded Super Bowl TV spot since the brand is in no position to drop $4.5 million for 30 seconds of air time during a football game.

While most crowdfunding campaigns depend on consumers to become a reality, the “Band of Brands” is made entirely of Newcastle’s peers in the business world. In exchange for a small contribution, any brand can join Newcastle’s team and have its logo and messaging featured in the spot.

In its first stunt of the season, Newcastle tried to sneak into the Doritos Super Bowl spot. An earlier video with Plaza, where the “Band of Brands” initiative was announced on Jan. 12, has garnered almost 600,000 views on YouTube.

“Now we’re trying to leverage "strength in numbers" to see what that does for us,” says Priscilla Flores Dohnert, brand director for Newcastle Brown Ale, in a release. “Everyone loves a great underdog story. What’s more ‘underdog’ than being short on cash and not having the right to advertising during the game?”

The “Band of Brands” program was created by Newcastle in partnership with Droga5, Fast Horse and MediaVest, as part of Newcastle’s long-running “No Bollocks” campaign, which takes a tongue-in-cheek approach to beer marketing.