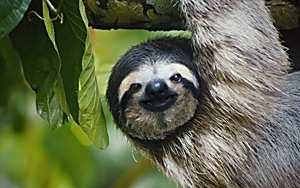 The Costa Rica tourism organization is following up on last year's campaign with a new, humorous effort playing on the nation's reputation for conservation and eco-tourism. The 2015 campaign makes the endangered species overworked Americans. The Costa Rica Tourism Board is dubbing the effort “Save the Americans,” its first “inter-species campaign.”

The idea, says the organization, is that Americans leave some 500 million vacation days every year unused. In the campaign, Costa Rican animals warn Americans that all work and no play is bad for mind and body.

The organization says the campaign, via 22squared and Cheryl Andrews Marketing Communications, includes an online and in-cinema music video featuring animals doing “The Lion Sleeps Tonight” rewritten by the song's singer/songwriter K.S. Rhoads to fit the campaign. The board says it got the rights to the song through intellectual property firm Wool & Tusk. The new version was recorded in Costa Rica with Costa Rican musicians; the video was produced by New York-based production house The Mill.

In the video, in which a sloth sings the lead (thanks to real footage and some CGI wizardry), we learn that the jungle is the concrete kind, and the point is made clear with cross shots of traffic, wan people in cubicles suffering under fluorescent lights, and buildings versus shots of Costa Rican paradise.

There is also a behind-the-scenes video that will show the process of creating the music video in Costa Rica. Social media elements are part of it, with the animals in the video serving as brand ambassadors exhorting desk jockeys to visit Costa Rica. The campaign includes a new Web site, SaveTheAmericans.org, launched last month and the organization has had out-of-home elements that include sand sculptures on Wall Street.

Last year around this time Costa Rica launched a new campaign with the tag “Essential Costa Rica,” and a focus less on nature than on the country's tech and business sectors. That effort also used Atlanta-based 22Squared

Said Alejandro Castro-Alfaro, director of marketing for the Costa Rica Tourism Board: “The Save the Americans campaign is fun, lighthearted and allows the opportunity for our country to share its cultural values with the North American market.”

About 60% of visitors to the Meso American country come from the U.S. The country has run promotional programs like “Costa Rica’s Million Dollar Gift of Happiness” and cruise line partnerships, e.g., with Royal Caribbean Cruise Lines in which Los Angeles, San Francisco, Boston and New York promoted travel packages that include three-night stays in Costa Rica. Back in 2012, Costa Rica was the 12th most-visited extra-national destination for Americans, tied with Japan. Number one was Mexico, and Costa Rico was behind China, Spain and India.